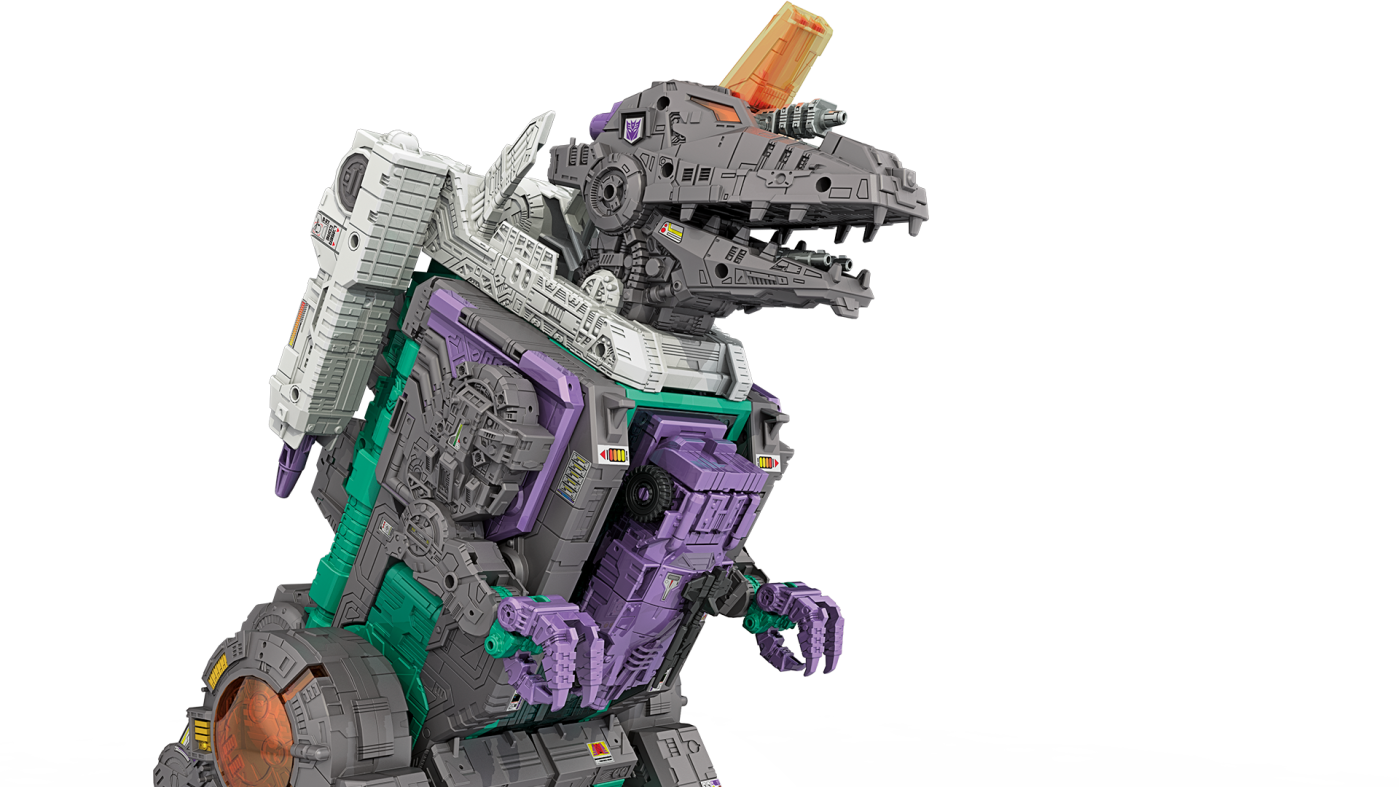 I really wasn’t going to.   Trypticon wasn’t one of those characters that had been a focus for me growing up from the comics or anything.   When he won the fan vote for the next Titan class figure, it wasn’t unexpected, but I think I’d personally voted for Scorponok.   Also I now had the new Fortress Maximus, so surely the itch for giant transforming robots was satisfied for now?

Then the reviews started hitting Youtube.   I had to admit he looked really cool.   I re-read the Transformers: Monstrosity series, which largely descended into a Godzilla movie with the Autobots desperately trying to stop a rampaging Trypticon.   Because he’s not a normal type of Transformer.   The giant robot dinosaur is his robot mode.  Usually they’d start as a robot and then turn into the T-Rex (looking at you various Grimlocks from across the toylines).

So, he’s huge.  Awesomely detailed.  And he’s essentially the Transformers version of Godzilla.   Oh go on then.

So I found myself cracking and picking up this latest Titan Class figure.   And he didn’t disappoint.

However, first there’s the elephant in the room.  The QC issues.

The real shame of this release have been the widespread reports of QC issues with the figure.  Particularly damning given both his price point, and the severity of at least one of the issues.

The headline problem has been the strength of springs used in Trypticon’s hips.   On some these springs are so overpowered, they’re virtually locking the ratchets in place, making the legs a nightmare to reposition, before eventually completely sheering apart the plastic parts of the mechanism.   Various fixes have emerged, from physically cutting the springs, to simply compressing them for an extended period to remove some of their tension.  Regardless, the idea that a toy in a triple figure price point needs that kind of surgery to disassemble and repair something, straight out of the box, is pretty damn poor.   I’m surprised that so far Hasbro seem to be virtually ignoring this issue, rather than performing a recall or at least a public announcement offering replacement parts.

For myself, I seem to be lucky in that the legs on mine seem to have been fine from the off.   I have been hit by one of the other QC issues though, with the door to Trypticon’s chest cavity being warped, meaning it wasn’t locking in correctly.  In my case this meant it wasn’t even stable enough to stay closed with the connector for Full-Tilt attached, let alone Full-Tilt himself.  Fortunately, following some online advice and tightening some of the chest screws seems to have helped the issue.   I’ll need to decide if I’m brave enough to actually try warming up and flattening out the piece correctly, but for now Trypticon can be displayed with Full-Tilt attached, so its fine.

Putting that to one side (although I admit, it is a big deal on a premium figure like this), Trypticon ticks all the boxes.   Unlike Max and moreso Metroplex he has a bulk to him that really works.   It does mean he’s not quite as tall as those other figures, but he’s still more than imposing enough.

When I realised I was getting to the point of wanting Trypticon, I did look at the re-released Platinum edition of the original G1 toy.  I figured it’d be cheaper if nothing else, but one thing really sold me on the new version over the original, and that’s the amount of moulded detail that he has.   When you look back at the G1 version, its really obvious how smooth all his surfaces are, and all that detail, adding panels as machinery to the figure really makes a big difference.  I’m sure he’s still a great toy, but for me there’s no doubt that the new version improves on him visually (even if it lacks the motorised walking of the original).

Unlike Max and Metroplex, Trypticon fairs better in his other modes as well I think.   Both Metroplex and Fort Max share a city mode that’s fine, and a battle-station mode that’s…err…there (although tends to be the figure sitting/lying down – albeit true to the originals).  Trypticon’s city and space cruiser modes work well, with each of his three modes looking suitably distinct.   A nice detail though is the way his nosecone section in space cruiser mode also has dinosaur-like features.

One of the things in this iteration of Trypticon that has been widely praised has been the new iteration of Full Tilt.   Historically the various G1 City-Bots came with various accessories, which could often be combined into a robot partner for the larger robot.   In this new version of Trypticon, his partner Full-Tilt has become a roughly deluxe-sized figure within his own right.  Not just a mere accessory.   Starting as a Dark Knight Tumbler-esque vehicle (albeit, very purple), Full-Tilt transforms into a robot, and includes his own Titan Master, Necro, who can sit in the vehicles cockpit, become Full-Tilt’s head, or indeed, can plug into a socket on Trypticon himself where he can be used to trigger Trypticon’s signature nose cannon (although in fairness, he just makes an existing button easier to press, so this last one works just as well without Necro attached).   Just like the original, Full-Tilt can attach to Trypticon in dinosaur mode, forming a type of chest armour, but he can also interact in his other modes, having a storage space in the nose cone/tail section, or you can launch him down the city ramps.

All in all, while expensive, Trypticon delivers, just like his predecessor in the class, Fortress Maximus.  It is a real shame the QC issues that have surfaced, and we know that Hasbro are aware of them, and are looking into it.  I do hope that we’re just hearing about a minority of cases, and most toys are unaffected, although its certainly a big issue if the hip problem does occur.  But that aside, Trypticon is a brilliant, imposing update to the original.